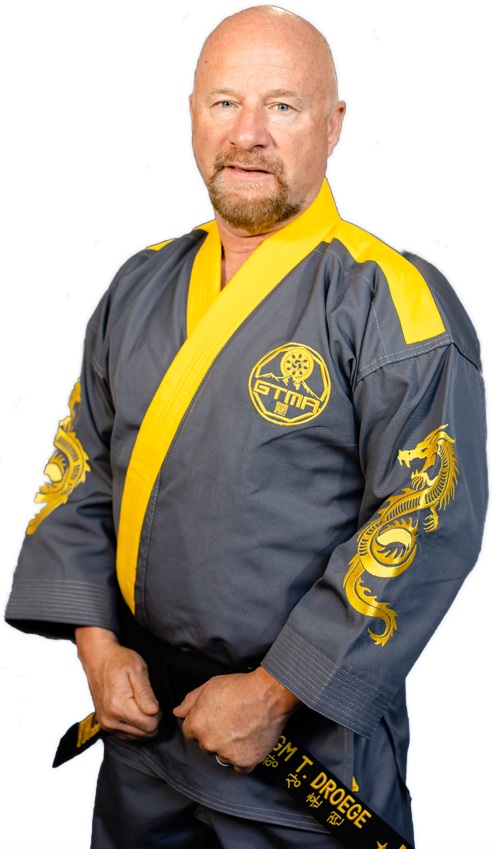 To all my fellow Martial Artists,

January is here and we are VERY proud to announce this month’s award. The award goes to Grand Master Todd Droege, the Founder of Tactical Martial Arts in Marietta, Georgia. He began his Martial Arts journey, specifically TKD, at nine years old while living in Northern KY. He earned his 1st-degree black belt in 1977 and became a National Champion and three-time world champion in sparring. He was among the youngest Master’s inducted into the ATA Hall of Fame. Grand Master has traveled throughout the World, from Portugal to the Netherlands, South Africa, South America, and across the United States. He has participated in and instructed three videos that were internationally sold through Judo Fanatics in Dynamic Striking.

In October of 2020 Grand Master Droege aa Founding Member in Global Traditional Martial Arts as he started a new path and very successful venture. He received his 9th degree in 2021 and the title of Grand Master in July of 2022. He was featured on the cover of TKD Times in July 2022 and as a featured article.

Grand Master began instruction in Krav Maga in 2001 and has been honored to teach for the DOD, Tier 1 SWAT teams, and other police agencies in this particular Martial Art. He had a firearms training company for approximately 20 years in which he taught active shooter response and personal protection in addition to all other aspects of firearm’s training. He and his wife, Susan a Veteran, own and operate one of the largest martial arts schools in the country. They built one of the most beautiful Martial Arts buildings in 2001 and have had a school since 1994—currently Grand Master Droege is 2nd in the command structure of one of the fastest growing Martial Arts organizations in the world called GTMA under Grand Master G K Lee.

I am respectfully requesting that our fellow Martial Artists join hands in a “Congratulatory Message”, honoring him on this lifetime achievement as a Grand Master. We are proud to call him the well-earned title of Grand Master and will be presenting him with the Go2Karate Recognition Award in February.

Congratulations on your accomplishment Sir!

Hello and Congratulations on your new title sir! Thank you for all you have done personally for me and my family sir. I use everyday some of the things you have taught me. You are certainly a Master in every sense of the word sir!

Congratulations on a well deserved recognition. GM Droege is an incredible instructor not only in Taekwondo but also and expert in TAC Krav Maga and his specialty as a firearms instructor!

Congrartulations! The award is well deserved.

I have known Grand Master Droege for over 20 years, he is a man of many talents not only in the martial arts, but in many areas of life. The way he can communicate with all of his students to get an idea across to them is not only insightful but caring, and creative all at the same time. Grand Master Droege, CONGRATULATIONS on all that you’ve accomplished!

I want to congratulate you on your 9th Degree Sir! You may not remember me, but I drove from Chattanooga to Atlanta, twice a week to train with you. Received my 2nd Degree and Trainee Instructor with you in the ATA. This was back in 1987.

What a privilege to have known you throughout your martial arts career! Congratulations on all of your success. It is the reward of dedication and passion about what you do!

I've known Grand Master Todd Droege for 30+ years and it's easy to say that he's one of the best instructors, practitioners, and people of character in martial arts. He's helped me personally become a better instructor just by watching him teach and by taking classes from him. Frankly, he's simply brilliant at communicating ideas and getting the essential, important and critical across to students. Congraatulations and "WELL DESERVED" to Grand Master Droege!

I’ve known Grand Master Todd Droege for 30+ years and it’s easy to say that he’s one of the best instructors, practitioners, and people of character in martial arts. He’s helped me personally become a better instructor just by watching him teach and by taking classes from him. Frankly, he’s simply brilliant at communicating ideas and getting the essential, important and critical across to students. Congraatulations and “WELL DESERVED” to Grand Master Droege!